We had always known that Zy was going to be hyperactive.  From the moment he started walking, he didn’t sit still unless he was sleeping.   Everyone always told us, “that’s how boys are!”.  Zy had his first seizure at the age of 6 months and regularly had around two a year for the next couple of years.  Since he had an older sister already diagnosed with Epilepsy, we had him tested several times, results showing normal.  When Zy was around the age of three, he was put on medicine to help control the seizures.  Even on meds, he continued to have one or two breakthroughs each year…so his daily dose kept increasing and increasing.

Around the age of three, we also noticed Zy would get frustrated very easily, when a toy would fall over, his world would end! These frustrations carried over to daycare and the behavior issues kept getting worse, so we brought in a behaviorist and Occupational Therapy several days a week.  Zy was on track and could explain exactly what he needed to do if he started to feel frustrated.  However, when his emotions took over, he wasn’t able to communicate effectively or use his skills that he was taught.  Eventually, we moved Zy from a large group daycare and preschool to small group and he thrived with no issues.

We were so excited for Zy to start Kindergarten, however at one point at the beginning of the year, he was only in his classroom for 5 minutes a day!  That’s when I happened to stumble upon a video of Dr. Tiffany talking about Epilepsy and behavioral issues on one of the local news stations.  I was intrigued and immediately set up an appointment.  We were on our last hope and there wasn’t much more the schools could do for our son!

Dr. Tiffany immediately got Zy started with care and along with medicine his Epilepsy and ADHD (we added this around the same time as the chiropractor), he did a complete 180! He was back in the classroom and having fabulous days at school.

After 15 months of continuous visits to Dr. Tiffany, we decided to take a break in December 2017.  We took a trip and Zy missed a few days of school.  When he returned, he had regressed back and was no longer in the classroom and visiting the Principal often.  His teacher was stunned.  We chalked it up to being out of school…a second week back at school, still not better.  Finally, we realized that his issues started up after we quite care with Dr. Tiffany.  We got him back in and the improvements were immediate!  He is back in his classroom.  He can make appropriate choices and voice his thoughts without getting frustrated!

We are very lucky to have found Dr. Tiffany and her staff!  Without them, Zy wouldn’t be as successful as he is now and I doubt he would be in his regular classroom learning with other 1st graders.  We will be forever grateful!

We can’t wait to see you. Please fill in the form below and we will be in touch shortly to confirm your appointment. 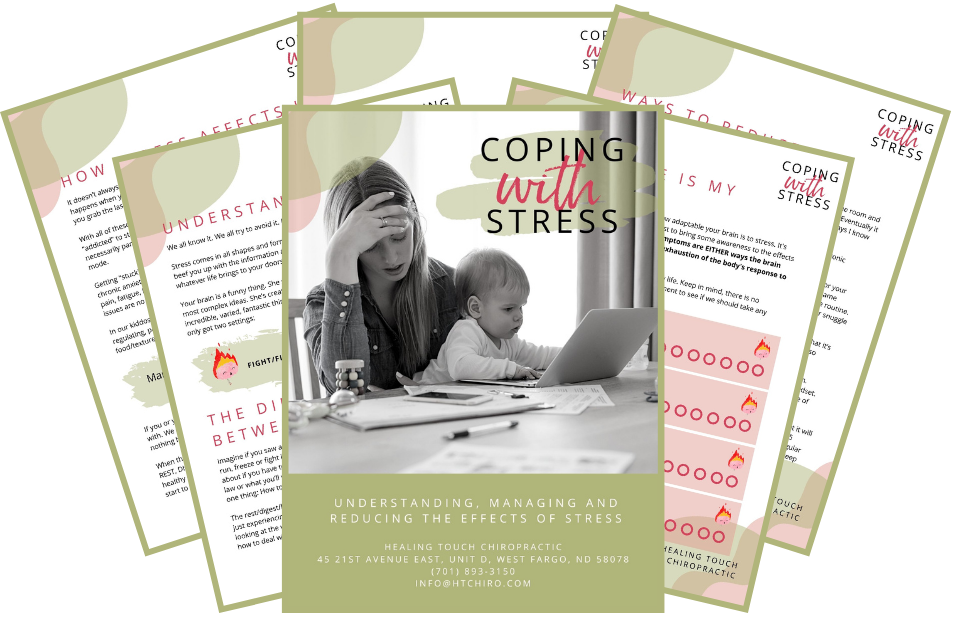 We are here to help. Learn about the effects of stress and how to deal with them in this incredible FREE resource!